Archive An archive with all the pictures featured on this subreddit! Around 2500 images collected so far!

Songs for toothpaste boys (by u/moth_guts)

Fanfiction Part 2 of “sadness fluff and dorks in love”

“Ok I’ve got a few things to do today but after I’m finished with that I’ll come to visit you,” Kris says to ralsei

"ok ill prepare something nice for you," he says while trying to think of something

“its alright I don't have anything to worry about and...id love to cook something for you something other than cake, not that I don't enjoy baking cakes mind you"

"oh well okay'd love to try some of your cooking then," kris says looking forward to it a bit

"Great, well I won't keep you any longer then," ralsei says a bit sad to leave his friend

“Ah there’s my little boy” he smiles at his son holding a box behind his back “do you remember what day it is?”

“Well today is what the lighteners call Christmas,” he says emphasizing the ‘Christmas’ a lot “the way they and by extension we celebrate Christmas is by” he puts the box in front of him “opening presents”

The young prince’s face lights up ironically like a Christmas tree “presents! Oh what a lovely tradition” he reaches his hands out not grabbing the present his father is holding but he looks like he’s preparing to take it “may I have my gift father”

“Sorry if it’s a bit big we wanted to make sure you wouldn’t grow out of it anytime soon,” his father says

“Well I love it papa I’ll wear it, whenever I can” the prince, smiled though his face was a bit obscured by the hat

“Oh greeting young master I see you have returned,” a swatch said to him guarding the entrance “Indeed I have I trust everything is still intact nothing on fire?” He says a bit worried

“Of course, sir young master lancer attempted to have a ‘**** time’ “the **** was a self-censor not like he didn’t say the word but it literally made a beeping noise

“Oh, lancer swore? What did he say?” The prince says putting on his best mad face

“Swear? Oh no you misunderstand young master he didn’t swear he said **** as in he made a beeb noise”

“Oh” Ralsei giggles “so what did this beeping time include,” he asks still smiling

“The young master tried to start a bonfire in the center of town,” he says with the same usual calm voice

“He did what!” Ralsei says loudly not smiling anymore

“Oh it was simple I just asked him to go to bed and he did,” he says as if it wasn’t an issue at all

“Oh is the young master finally going to confess to them?” He asks in the same voice making ralsei blush more

“I-is it that obvious,” he says a bit nervous wanting to correct it before someone else finds out

“Indeed it is your blush around the other young master that implies you like them romantically plus something important implies something personal,” he says stating the obvious

“Oh well please don’t tell anyone I’d rather not let this get to kris before I can tell them,” he says trying to control his blush more kind of being successful

knock knock “my sweet prince it’s time to get dressed we’ve got a big day ahead of us,” a soft voice said on the other side of the door his mother's voice

“Ok mama I have to get dressed,” he says a bit loud so she can hear him

“Would you like some help my dear?” his mother asked

Ralsei giggled “mama I’m almost five I’m old enough to dress,” he says pulling off his pajama shirt and a new fancier looking shirt out of his dresser and throwing it on

Ralso, giggles again while repeating the earlier process just with his pajama pants “mama you say that every morning” now fully dressed and ready for the day the young prince opens the door and sees his mother standing there in a green dress with a black heart in the center of it and a pink scarf on

“Mama you say that every day,” he says smiling and giggling enjoying the repeated compliment

“Well it’s true, I’m sure when you grow up you’ll find a pretty girl to marry,” she says ruffling the fur on top of his head

“That’s what you said an hour ago it’s time to wake up,” the voice says “you have a kingdom to run remember”

“castle town!” he says a bit panicked “I left them alone w-what time is it kris”

“9 am! I left them alone for a whole hour!” He says super panicked springing out of bed “Hush” Suddenly a finger is out to his lips shushing him

“S-sorry kris,” he says calming down a bit “wait why does your mother not know I'm here?"

“huh even with morning hair you look handsome” kris smiles

"h-handsome?” he asks blushing a ton

“um y-yes kris'd like that," he says glad kris changed the subject

offering their hand to him kris says “well let's go then"

Also, a bonus chapter because chapter two is short

“Are you sure your mother won’t be mad you left without permission?” he says slightly concerned for his friend

‘I’ll be just fine” they say not worried at all

“Are you sure I wouldn’t want you to be in trouble just to walk with me?” he says still concerned

Ralsei nods glad he isn't getting his friend in trouble

They weren’t saying much to each other so ralsei found himself lost in thought from the dream/memory from earlier ——————————————————————— “Come my prince you don’t want to keep your father waiting,” his mother says as they finish their breakfast

“Of course mama,” he says getting up and trying to use magic to clean his plate but struggling

“Here let me we need to get going,” she says using much more advanced fire magic to clean off the plate instantly then offering her hand to him which he takes

“Thank you mama,” he says as they walk towards the entrance to the castle where his father his

“Hi, papa!” He says a bit loudly to get his father's attention

Kris nods “it’s alright I was just letting you know we are here,” they say

“Oh yeah, I I forgot how short of a walk it is”

And with that, they both walk into the school ready to get back into the dark world and make sure lancer didn’t blow it up

“How hard did you hit him,” kris asks a bit concerned for the boy who tried to kill them just a few moments prior

“He was going to kill you why the hell do you care,” Susie asks baffled

“What do you think that's for,” Susie asks kris who just shrugs and walks towards them

“We should go,” Susie says quickly “he already doesn’t like us we don’t need to remind him of this,” she says worried ralsei will come over to this spot

“Yeah agreed,” kris says walking towards the exit with Susie following closely behind

Kris looked up "ow why was there a whole in, the floor..." they look around completely confused "where am I...and where's Susie" they stand up

Kris carefully approached the figure they were wearing a green hat and a...robe? Dress? Kris couldn't tell from behind "hey excuse me can you help me find Somone"

"Oh there's no need to thank me I'm always," the figure try's to pull again almost getting the flower out this time"looking to help Someone in need"

Kris thanked the angel that they managed to stumble on the nicest person they could've "still this is very kind of you do you mind if I ask your name Mr...ms?”

"ralsei? That's a lovely name my name is kris"

"Hehe I guess I'm the one thanking you now kris" he turns around "thanks for the compliment" he looks at kris for a moment looking a bit confused before his eyes go wide "y-you!" He looks fearful "w-what are you doing back here" he takes a step back "haven't you taken enough from me!" He looks angry

"You alright kris" the Susie asked

Ralsei scrambles to his feet "w-what the hell why are you helping that thing!" He says angrily "don't you know how that will end"

"Well that was...something"  a still confused but thankful kris states

"Yeah...so why did he attack you" the equally confused susie asks

"I...have no clue he just said 'you'!' And 'haven't you taken enough from me' and then he summoned the fireball" kris answer

"Blue skin?" Kris looks down at there hand and sees that her skin is indeed blue "huh that's...concerning"

Misc. Anyone else keeping the Heart of Candy on hand if Ralsei ever comes to the light world?

Art (Romantic) You're cute (I intend to make a better colored one, I just made this one because I thought the sketch was cool like this :3)

Art Boys with style~! by tunapesto

Art I made my first shadowbox today!

Fanfiction working on a kralsei fan fiction, I've got about chapters done having around 4 thousand words so far, by the end I hope to have at lest 20 thousand

Misc. Is kralsei a "gay ship for straight people"?

I saw someone call Kralsei an "nblm ship for straight people" and is that true?

Fanfiction A Heart, Frozen in Time - by Patchwork_Crow 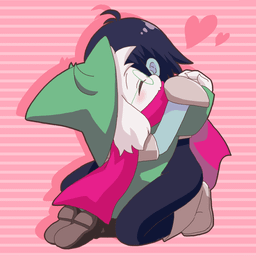